Today is the first day of Fall.  I woke up to a brisk 46F here in Chicagoland. (That’s just a mere 14 degrees above freezing in case you needed the math done.) So, why am I excited about it…? Because it’s just a short NINE more days until the official start of pro hockey.  Chicago Blackhawks Hockey. Woohoo!

……and how do you jump from cold, icy hockey to tropical heat and palm trees, you ask? Good times with Hockey fans. That’s how. 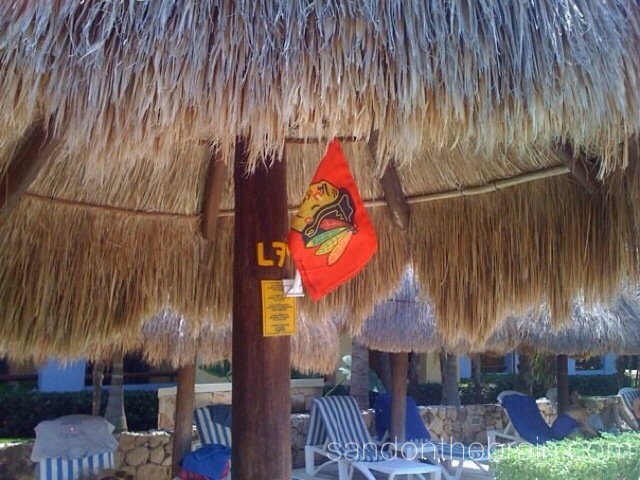 Mr SOTB and I were enjoying a vacation at the fantastic Iberostar Paraiso Maya in Mexico during the hockey playoffs in 2010. That trip seemed like every other guest that we started up a conversation with was from Illinois! (…was anyone left back home?? ). The terrific thing was the power in numbers. The resort management specially purchased the sports package via satellite since enough of us were asking if they could show the hockey game.

It was great! About 15-20 vacationers…. some with a little sunburn, some clearly having spent a full day enjoying cocktails… all made our way to the sports bar where on the big screen it was hockey time! This small group of devoted fans…including the owner of the Hawks flag on the palapa pictured above… proceeded to stand for the national anthem (the American one…. while vacationing in Mexico)….cheered, hooted and rallied our team on to a win!  The following days whenever you passed one of the fellow fans, you could see that sparkle in the eye and that head held high in the after glow of the win.   What a great memory!

June 2013, here we are in a shortened NHL season with my Chicago Blackhawks looking Stanley Cup worthy again. Despite being on the beautiful Caribbean paradise of Grand Cayman, we have a goal; find someplace to watch hockey.

We found our answer at Club House Bar & Grill. Nothing fancy, just simple bar food with the benefit of fresh, cold pitchers of local island Caybrew beer … and hockey on a 15′ BIG screen and every other TV in the bar. Sweet!

Seated at the next table was a fan for the opposing team– the Boston Bruins. In the course of the game and into ohmygosh…triple overtime (what a game! Recap here.) we had a blast ribbing and kidding around with that Bruins fan; a local steel drum teacher Earl La Pierre. Earl’s nerves were on edge and he joked about his students not understanding the game. As the clock neared midnight and the final horn exclaimed the Blackhawks win, congratulations were given… including a round of drinks from Chico (who worked at the bar and is also a pirate ship excursion guy!).

And there you have it! Cold steel on ice will easily trigger the sandonthebrain memories of sunshine and palm trees by day and hockey by night. Blackhawks red also goes pretty well with Caribbean blue doncha think?